It is firmly ahead of search giant Google in second, mineral water brand Aqua (in third) and Indomie, the noodle producer. Streaming service YouTube is in fifth, just ahead of device manufacturer Samsung in sixth.

The rankings are based on YouGov BrandIndex’s Index score, which measures overall brand health. The score takes into account consumers’ perception of a brand’s overall quality, value, impression, reputation, satisfaction and whether consumers would recommend the brand to others.

YouGov also analysed who has seen the greatest improvement in brand health over the past year. Samsung has seen by far the biggest advance among Indonesians in the past 12 months, seeing its score rise by +18.6 points. This is comfortably ahead of convenience store chain Indomaret, which is in second place with an increase of +8.0. Consumer electronics company Xiaomi is in third, having seen its score rise by +7.7 over the last year. The top five is completed by sportswear manufacturer Adidas (+7.6) and social media platform Instagram (+7.4). 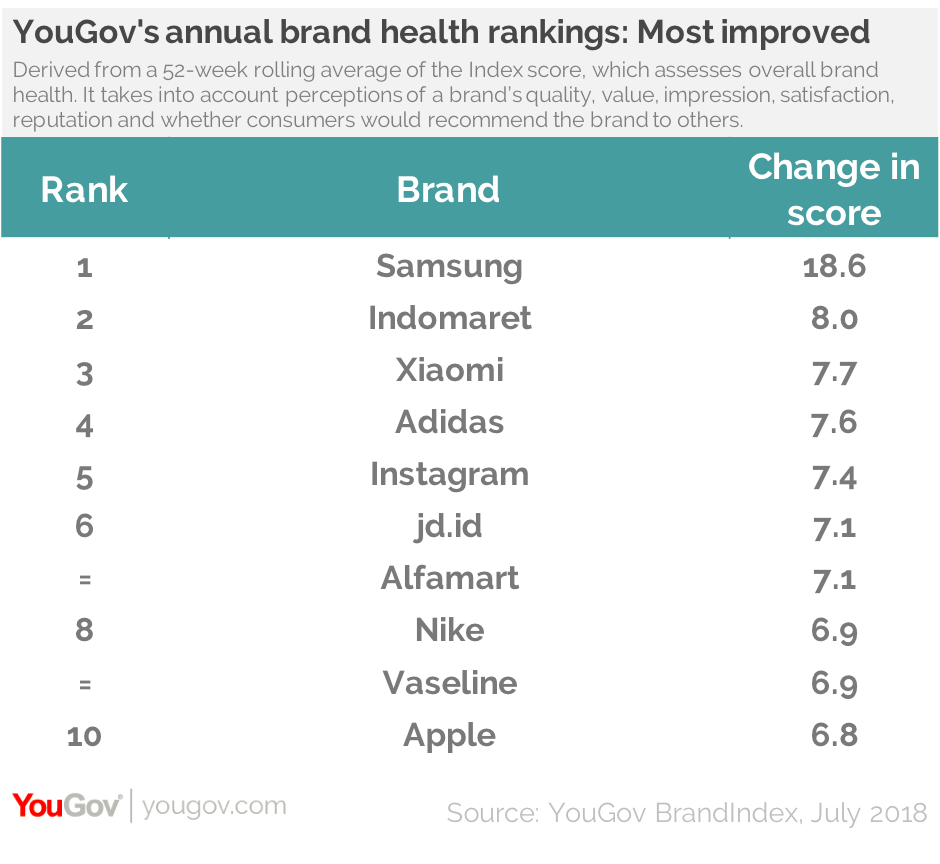 YouGov also releases the global annual brand health rankings for 2018. These rankings are based on six million interviews conducted in 26 countries.

Google tops the annual global brand health rankings, followed by YouTube. Samsung jumps one place from last year, climbing to third position as does messenger service WhatsApp, which rises to fourth. However, WhatsApp’s parent company, Facebook, falls two places to fifth. While Amazon remains sixth on the list, IKEA and Lego enter the rankings at number seven and ten, respectively.