Indonesia is the world’s second largest contributor to plastic pollution, and latest YouGov research shows that Indonesians are still big consumers of single-use plastic, with one in four (27%) using plastic straws daily. 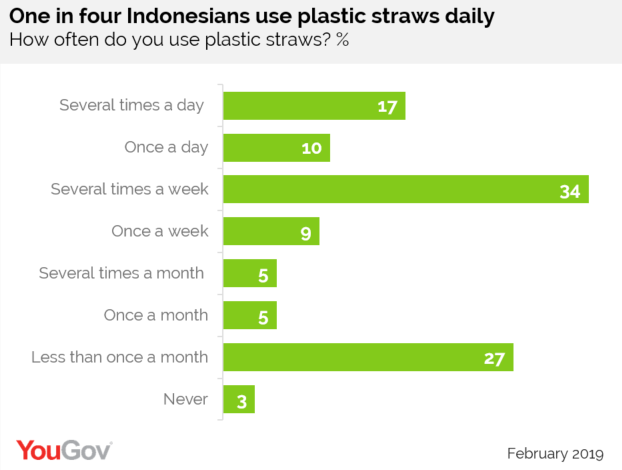 Although plastic straw use is high, a quarter (25%) of Indonesians own reusable ones. Those with a university degree or higher are more likely than those with qualifications lower than a degree to own one (29% vs. 21%).

The most popular reason for not owning a popular straw is that people not seeing the need to use one (44%). This is followed by people not knowing where to get one (38%), and not owning one but intending to purchase one (21%).

Straws aren’t the only types of single-use plastic. Almost four in ten (36%) of Indonesians also use single-use plastic bags at least once a day. When making a purchase only one in five (22%) ask for no bag, while six in ten (62%) sometimes refuse one, and one in six (16%) always take a plastic bag with their purchase.

Overall, the majority (95%) of Indonesians agree that it is important to conserve the environment, with over eight in ten (86%) thinking it very important, and one in ten (9%) say it is somewhat important. The remaining 5% don’t think it is important.

Indonesians believe that consumers have the biggest role to play in conserving the environment (50% ranked first), followed by the government (29% ranked first) and NGOs (14% ranked first).

Jake Gammon, Head of YouGov Omnibus APAC commented: “While most Indonesians believe that conserving the environment is important, our data shows that many are still relying on single-use plastics on a daily basis. Many appear to realise the actions of their own ways, with half of Indonesian consumers thinking the responsibility of conserving the environment is on themselves.”