by
Kim Ho
in
Travel & countries

Japan the most popular destination for migration

Of all the reasons to move abroad, the most common is for a better quality of life (63%). Other reasons include better public services (56%), personal reasons (46%), better job opportunities (46%) and greater wealth / affluence (36%). 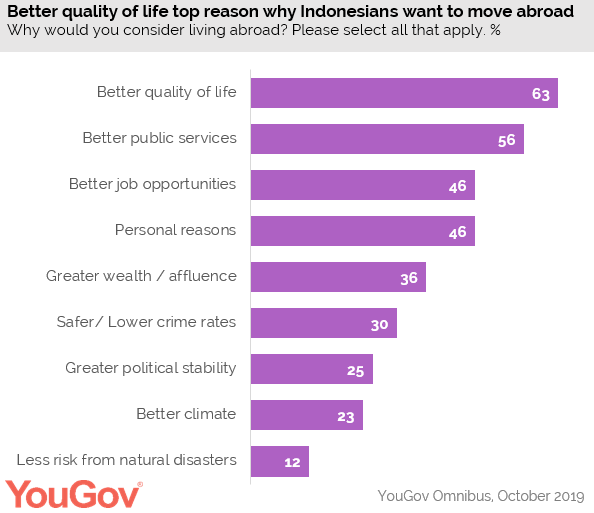 Some Indonesians have taken it one step further, for those thinking of moving abroad, a third (33%) having actively taken steps in the past six months to move abroad. Those aged 25 to 34 are the most likely to have actively taken steps, with almost two in five (38%) having done so.

Jake Gammon, Head of Omnibus APAC at YouGov Omnibus commented: “As the world becomes increasing globalised, many Indonesians are now seeking opportunities abroad. Migration seems particularly on the minds of young women, for a multitude of reasons. It’ll be interesting to see if these thoughts turn into actions in the coming years.”

***Results based on 1,289 Indonesians surveyed on YouGov Omnibus