by
Kim Ho
in
Food & drink

Soft drink giant Pepsi has officially withdrawn from the Indonesian market, discontinuing their contract with local distributor Indofood CBP earlier last month. While the news did not come as a surprise, the decision made headlines, marking a rare occasion of a big brand quitting a market. Latest YouGov Plan & Track data looks into the decline of Pepsi, and the potential factors that led to this.

Looking back over the year, we tracked Pepsi’s Current Customer score – which looks at whether someone has purchased from the brand in the last 30 days. A year ago, Pepsi held a score of +7.8, and today it stands at +6.7. This shows that over a year, Pepsi failed to grow its customer base in Indonesia. Pepsi isn’t the only brand that has struggled to obtain new customers. Coca-Cola went from a score of +20.2 to + 17.2 and Pocari Sweat dropped from +30.2 to +25.2. This shows an overall decline in customers of soft drinks. 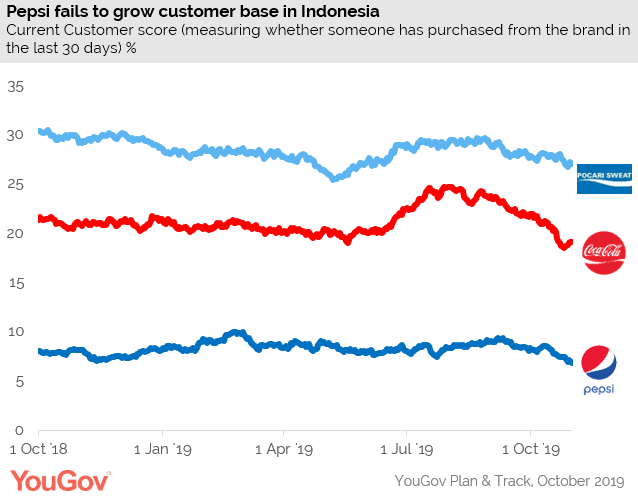 The difficulty in growing soft drink customer base in Indonesia could be attributed to the fact that a significant part of the population does not drink soft drinks at all. Looking at the monthly spending on soft drinks, we can see that half (51%) do not spend any money on soft drinks. 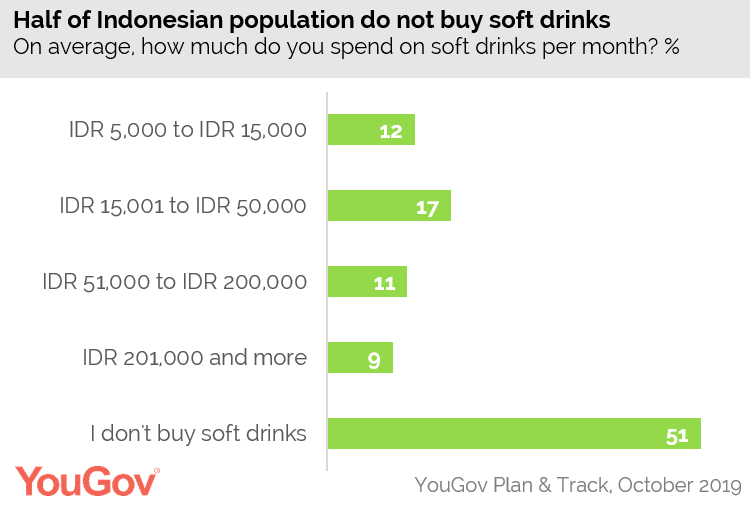 Considering the fact that only half the population spend money on soft drinks, Pepsi would have to effectively capture the remaining part of the market. This means selling its drinks to all an equal distribution of the population. However Pepsi was unable to do so. While the drink is popular amongst those 18 to 24, accounting for two in five (41%) of their customers, it is not popular amongst other age groups. For example, although over a third (35%) of the population are aged 25 to 34, only three in ten (32%) of its customers are this age. 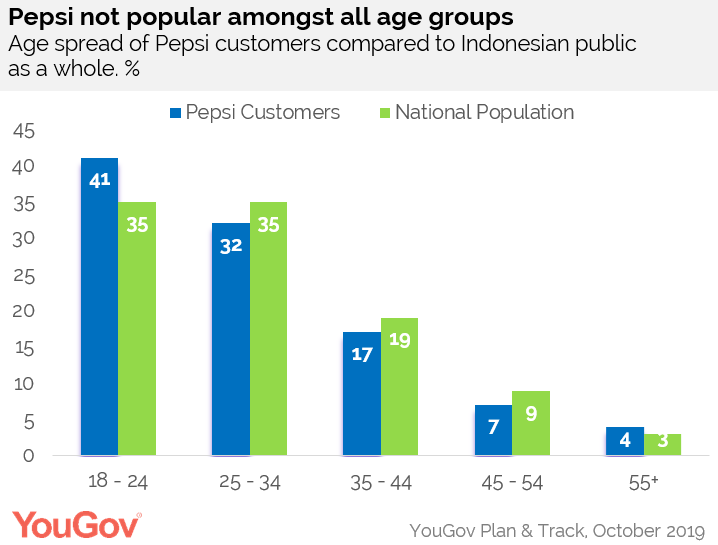 Pepsi has also been in close competition with other soft drink manufacturers. Its biggest competitors are Coca-Cola, Sprite, Pocari Sweat, Fanta and Teh Botol Harum. Among Pepsi customers, three in five (58%) are also Coca Cola customers, meaning Pepsi drinkers are likely to be Coca Cola drinkers. This shows that brand loyalty to Pepsi is not high. 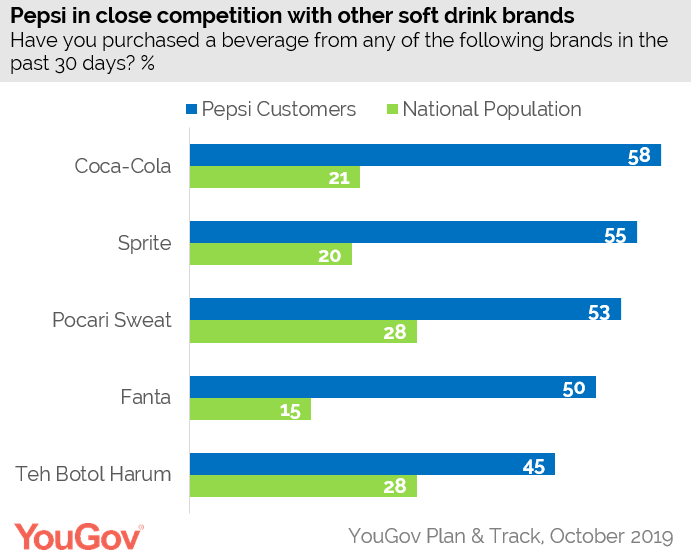 Looking to the future, what can the remaining competitors do to remain afloat? Looking at the drink frequency of other drink categories, it might be worth exploring producing other types of drinks. While about half (47%) of Indonesians almost never drink soft drinks, this drops to one in five (20%) when it comes to iced tea. This further drops to 16% when it comes to fruit juice drinks, and only one in ten (11%) almost never drink pure fruit juice. By producing pure fruit juice, drink manufacturers could sell to the majority of the Indonesian population, instead of currently only targeting half.

It’s too soon to tell who will emerge the clear market winner after Pepsi’s departure. In spite of reports about Coca-Cola ramping up production, there has been no movement in Current Customer scores on YouGov Plan & Track. What we can see however, from the soft drink brand that currently dominates the Indonesian market – Pocari Sweat (which sells to 28% of Indonesian population), is that they fare well in several metrics that help influence market share. Their Satisfaction score, which looks at whether customers are satisfied with the brand has remained high, currently holding a score of +93.4, compared to Coca-Cola’s +57.0. Pocari Sweat customers are also much more likely to recommend the brand to their friends and family, with their Recommend score at +93.1. In comparison, Sprite’s Recommend score is +32.2. By ensuring customer satisfaction, which would lead to them recommending the brand, this could help improve brand health, and potentially boost market share.