This month, sweet tea Tehbotol Sosro is the brand that has achieved the highest uplift in its Ad Awareness over the past month.

The rise coincides with their latest ‘Sebotol Karya Anak Bangsa’ (loosely translated as ‘One bottle for the nation’s children’) in conjunction with Indonesia’s Independence Day.

Launched about a month ago, the ad depicts two young Indonesians at work – a fashion designer and a music producer. They are drinking the sweet tea beverage as they go about their days, before showcasing their final works appearing on a fashion and music magazine. The voice-over talks about although Indonesians are of different races and culture; it is the similarities that bind them. The ad ends with Indonesians drinking the beverage over rolling green hills, waving the flag proudly. 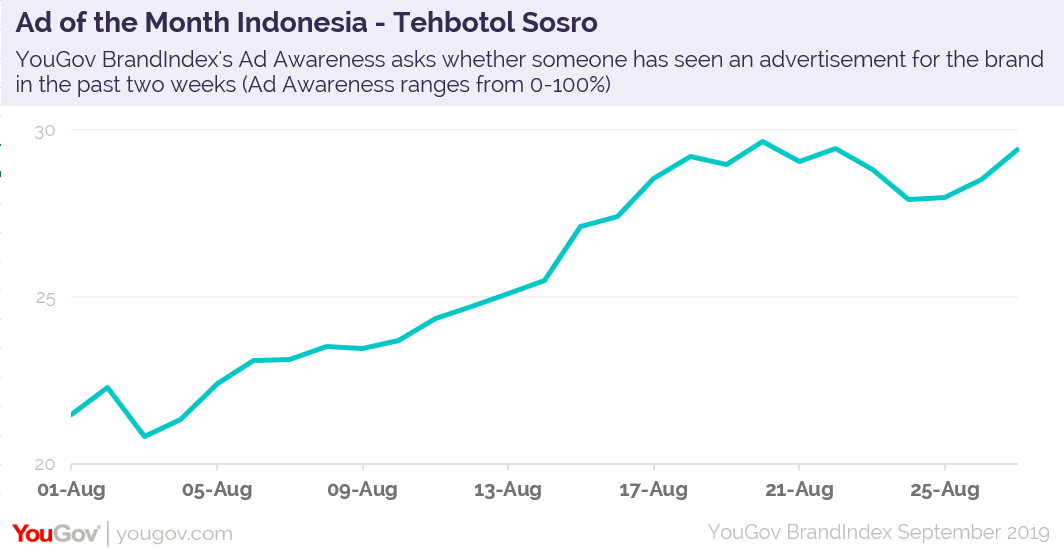 YouGov BrandIndex data shows that the patriotic ad has captured Indonesians attention. Tehbotol Sosro’s Ad Awareness score (whether someone has seen an advert for the brand in the past two weeks) has risen from 21.5 to 28.6, jumping +7.1 points.

Not only are people noticing the ad, they are also now more likely to recommend the brand. It’s Recommend score has risen +6.7 points from 19.2 to 25.9.