by
Kim Ho
in
Digital & technology

Philippines highest number of gamers over the age of 55

Latest data from YouGov’s Gaming and esports: The next generation white paper provides an analysis of the global video games and esports landscape across 24 markets. YouGov Asia Pacific examines the gaming behaviours across six ASEAN nations – Singapore, Philippines, Thailand, Vietnam, Malaysia and Indonesia, to see how gamers vary across these neighbouring countries. 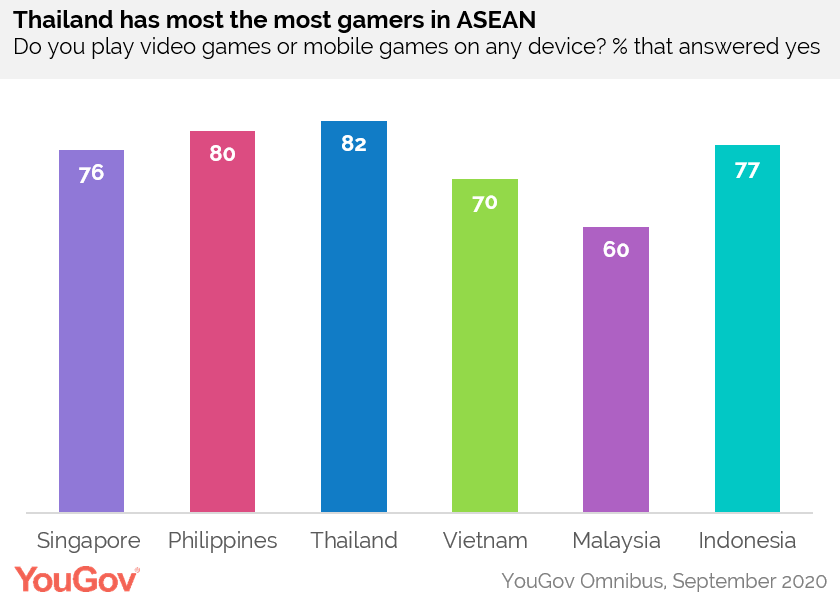 Across six ASEAN nations, Thailand boasts the highest number of gamers, with over eight in ten (82%) playing some form of mobile or video games. They are closely followed by the Philippines (80%), Indonesia (77%) and Singapore (76%). Malaysia has the lowest number of gamers in the region, with only six in ten (60%) saying that they play mobile or video games. With the exception of Singapore in which the gender of gamers are almost equally split, data from the other five nations show that gamers are more likely to be male. 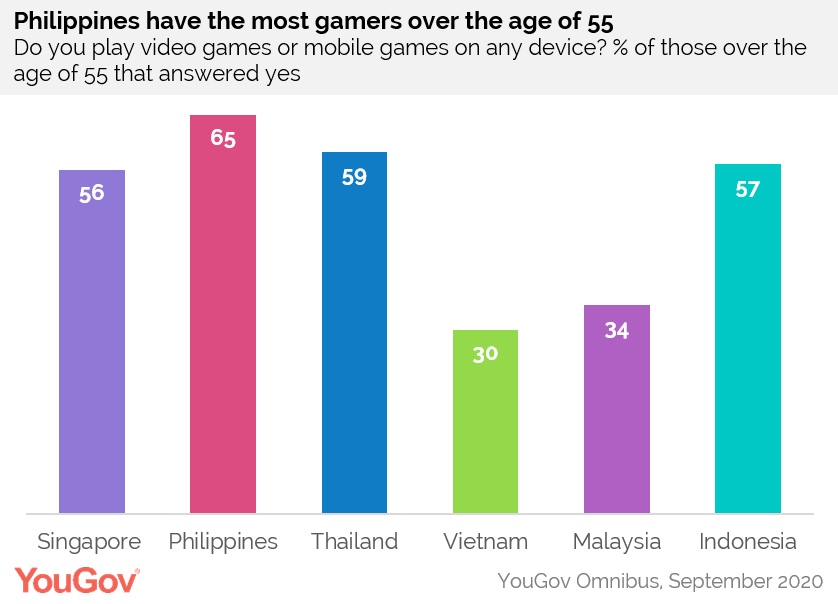 While Thailand has the most gamers, Filipinos are the most likely to have gamers over the age of 55. In the Philippines, two thirds (65%) of those aged 55 and older play mobile or video games. Thailand comes in second place for elderly gamers (59%), Indonesia in third (57%) and Singapore in fourth (56%). Malaysia and Vietnam are the least likely to see senior citizens playing games (34% and 30% respectively).

With the upcoming launch of Sony’s PlayStation 5 and Microsoft’s Xbox Series X, YouGov examined the prevalence of console use and access in ASEAN. When looking at which nation has either the highest ownership or access to a console, Indonesia came up on top, with over half (55%) being able to get their hands on one. Indonesia is closely followed by Thailand and Vietnam (both 52%), Philippines (50%), and Singapore (46%). Malaysians are the least likely to own or have access to a console (42%).

“YouGov is primed to play an important role in demystifying this industry for brands through data, which is why our first large-scale, global whitepaper on esports and gaming comes at the perfect time. Our breadth and depth of global tracking, profiling, and custom survey data is industry-leading, and I’m excited to showcase just how valuable the combination of daily performance tracking and nuanced analysis of the world’s gaming audience can be to stakeholders across the gaming ecosystem.

“This whitepaper offers a foundational understanding of gamers – which, given the number of countries, platforms, titles, streaming sites, and competitions at this audience’s fingertips is far from basic in today’s gaming landscape. Beyond our extensive industry expertise, we also explore key trends that will drive continued growth for gaming into 2021, all rooted in data from consumers around the world – the ultimate source of truth for understanding the next generation of gaming.”

***Results based on 8,394 people surveyed on YouGov Omnibus across six ASEAN nations. The breakdown of sample size in each nation are as follows: Singapore (1,053), Philippines (1,057), Thailand (2,079), Vietnam (1,099), Malaysia (1,075) and Indonesia (2,031). Data is nationally representative of the population in Singapore, and representative of the online population in Philippines, Thailand, Vietnam, Malaysia and Indonesia.