by
Kim Ho
in
Business & finance

The majority will cut back on non-essential spending

Latest YouGov research looks into the financial impact COVID-19 has had on Indonesians, and how their behaviors and priorities will continue in 2021.

Given the impact the pandemic has had on the global economy and workforce, it is perhaps unsurprising that seven in ten (72%) have since actively reduced non-essential expenses. This is particularly the case for those aged 45 and up, with over eight in ten (84%) having done so. Younger Indonesians (aged 18 to 24) are the least likely to have reduced unnecessary expenditure, with only three in five (62%) having done so. Conversely, younger Indonesians (aged 18 to 24) are the most likely to have saved more in the past six months, and those over 45 are the least likely (38% vs. 22%). Over a third (35%) have also dipped into their savings for expenses, and almost one in ten (9%) have refinanced (replacement of existing debt obligation with another debt obligation under different terms).

One in ten (10%) had to take on more debt to cover their expenses. This is particularly the case for those aged 35 to 44, where one in seven (14%) having gone further in debt.

It has not been all doom and gloom for Indonesians recently though, over a third (35%) have managed to save more in the past six months and 3% have not had to do any of the aforementioned. 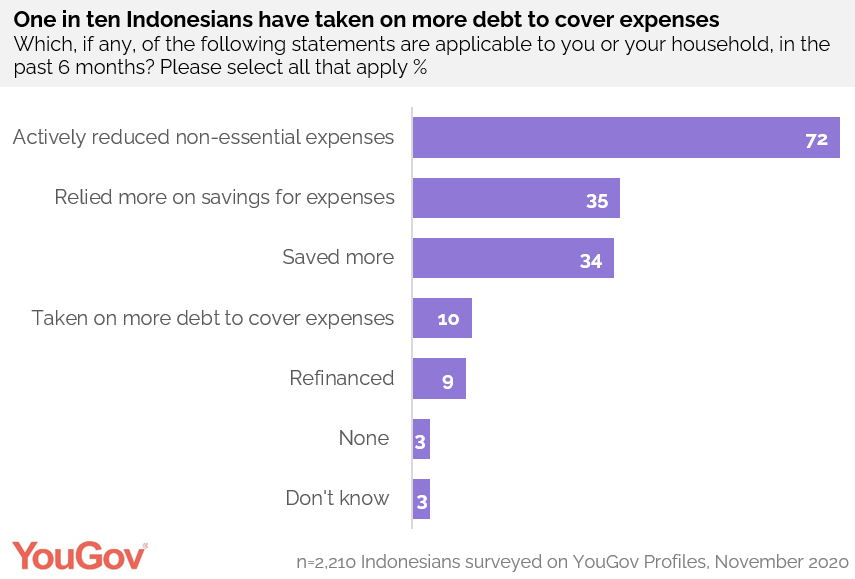 Looking to the future, the majority (87%) of Indonesians intend to cut back on non-essential spending. This trend is echoed across other APAC markets surveyed, where at least two-thirds of consumers plan to cut their costs going forward. In line with recommendations to avoid physical touching, two thirds (66%) also intend to use digital banking services wherever possible, and over half (57%) will now avoid visiting banks in person whenever possible.

YouGov also looked at the financial priorities of Indonesians this year. Saving money for unexpected hardship (54%) came up top, followed by ensuring one can meet their regular financial commitments (38%) and making money by investing (37%). Financial priorities differ between age groups, however. Those aged 45 and up are most likely to prioritise ensuring they can meet their financial commitments, compared to those aged 34 and below (46% vs. 32%). Older Indonesians (aged 45 and up) are also more likely to ensure that they and their families are adequately protected in case of an emergency compared to younger Indonesians (aged 34 and below) (46% vs 32%).

Those aged 35 to 44 are the most concerned about paying off their debts (40%) in the next twelve months, compared to only a quarter (24%) of adults aged 34 and below. Data shows that the priorities of younger Indonesians are predominantly focused on spending more. Compared to those 45 and up they are almost three times more likely to prioritise purchasing assets (11% vs. 4%), and almost twice as likely to prioritise purchasing a home or property (12% vs. 7%). They are also twice as likely than all other age groups to prioritise returning to pre-pandemic spending habits (7% vs. 3%). 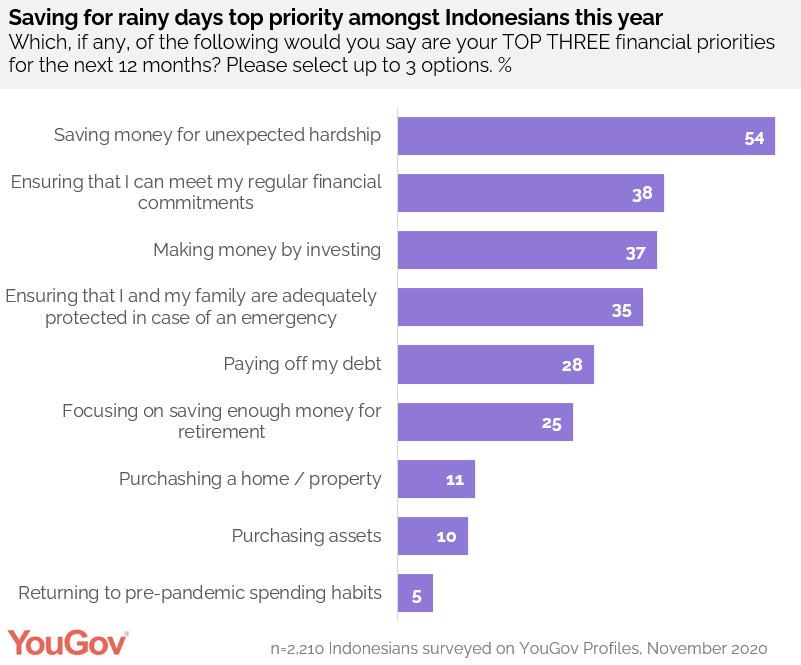 Edward Hutasoit, General Manager of YouGov Indonesia commented: “The past year has a been real blow financially to people across the globe, and Indonesia is no different, as we see as significant proportion going further into debt or refinancing to cover their expenses. However, data also shows that Indonesians are a financially prudent bunch, with the majority intending to cut back on non-essential expenses, and their top priorities revolve around saving. It remains to be seen how much longer the pandemic will take a toll on people’s financial situation, but it is clear Indonesians are prepared to weather any storm by focusing on saving for rainy days.”

***Results based on 2,210 Indonesians surveyed on YouGov Profiles