Bali is the most favoured holiday destination among Indonesians, finds YouGov’s Travel & Tourism Rankings 2022. The island topped the Destination Rankings for the second year in a row with a convincing score of 63.8 – almost 30 points ahead of the runner-up. 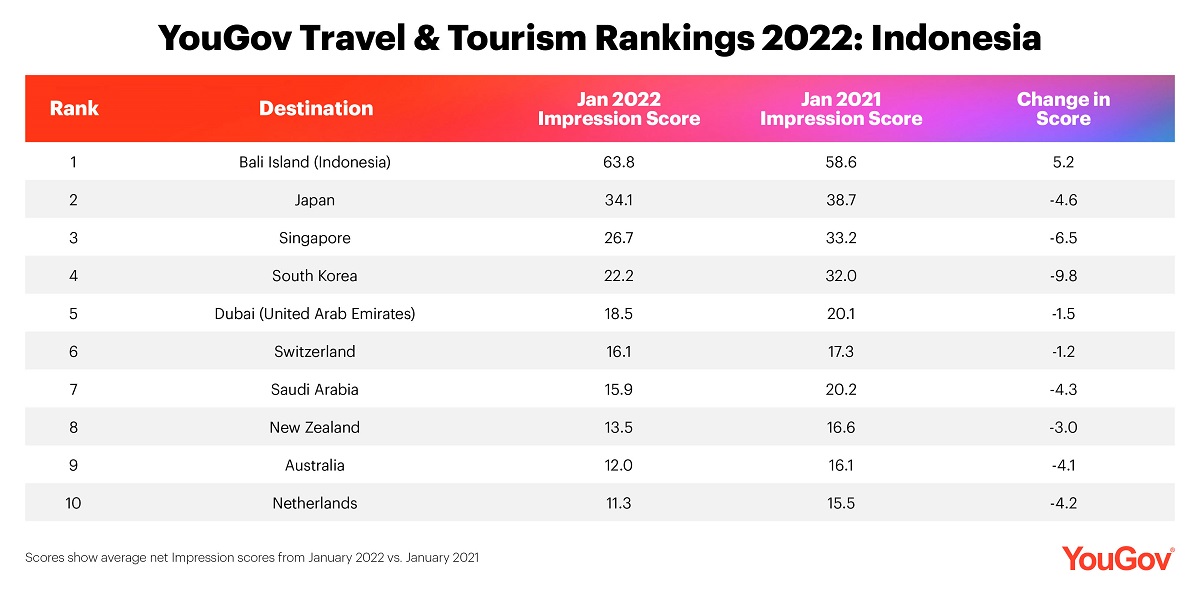 Meanwhile, Japan (34.1 points) maintained its second-place position in the rankings, despite a fall in score of -4.6 points. Singapore rounds of the top three with a score of 26.7.

Next on the rankings are South Korea (22.2 points), Dubai (18.5 points) and Switzerland (16.1 points) – the third being one of only two European destinations on the Indonesian rankings.

Completing the top ten is the Netherlands (11.3 points) – the only other European destination.

Notably, all cities and countries across the destination rankings experienced a fall in Impression score from January 2021 to 2022. The sole exception is top-ranked destination Bali, which had an improved score of +5.2 points.

Bali’s strong Impression score is consistent with travel activity, with almost 150,000 domestic visitors flying into Bali in the first two weeks of December 2021. Additionally, Ngurah Rai International Airport reportedly served almost 600,000 incoming and outgoing passengers in January 2022, with the most popular travel routes flying to and from Jakarta,  Surabaya and Makassar – illustrating the strong domestic tourism in the country.

Learn more about the key opportunities and challenges for the travel and tourism sector in the Travel & Tourism Rankings 2022.

The data included in the YouGov Travel & Tourism: Brand & Destination Rankings Report 2022 has been drawn from YouGov BrandIndex and YouGov DestinationIndex respectively. The markets included in this report are Australia, China, France, Germany, Indonesia, Japan, UAE, UK and US.

The destination rankings charts show those destinations which received the highest average score. The scores are representative of the general population of adults 18+ for all markets (Indonesia and China are online representative).

All scores listed have been rounded to a single decimal place; however, we have used additional precision to assign ranks. All brands must be tracked for at least six months to be included in either ranking.